J. Gary Minkert, "MINK," (10 June 1910 - 22 July 1969) was a Texas artist, sign painter, art instructor, and sculptor. Known to friends and family as Gary, he signed his work "MINK." He is one of the most recognized figures in mid 20th-century Texas art. He is best known for painting-knife landscapes and felt tip pen drawings.  He also attracted some comment with extraordinarily unconventional works such as Venus and Jonah and the Fish. Among his most famous works are  Ferguson's Crossing (1962) and Squattin' Squaw otherwise known as Seated Woman. His work was influenced by early twentieth century impressionists and cubists.

Mink was born in Bryan, located in east central Texas. He was the middle of the five children of  Jesse Gardner Minkert (1874-1956) and Sarah Frances McClung (1880-1952).  Mink was a third generation sign painter.  His grandfather, William H. Minkert, was a sign and buggy painter and artist with a studio on Main Street in Bryan. He painted the glass transoms over the doors of the old Brazos County Courthouse. Mink's father painted signs as a youth before becoming a lawyer and judge.

As a child, Mink was known for his caricatures of teachers. On his eighteenth birthday he received one month of training in the Basic Course, Infantry Branch at the Citizens Military Training College at Fort Sam Houston near San Antonio, Texas. He qualified as a marksman and was recommended for the Red Course, but did not pursue it. Following this, he began college at Texas A & M , but his college career was interrupted by the Great Depression. During the Depression, Mink lived on a family farm in a  log house near Kurtin, Texas.  Mink raised a large garden which he shared with his extended family. Mink met Hazel Ora Blackmon at the First Baptist Church of Bryan where she worked as secretary and he performed "Chalk Talks" for Training Union.  Hazel was born in Daphne, Alabama, February 10, 1910 and followed her sister and mother to Bryan during the Great Depression . Mink and Hazel married on March 6, 1935. They had a daughter, Patti, the next year. Mink bought a Victorian house (circa 1895) in 1941 located at 700 East 30th Street in Bryan, Texas. He began his art career making hand painted and silk screened signs for Lily Ice Cream Company. Later he built a concrete block sign shop behind the house and facing Hutchins Street. 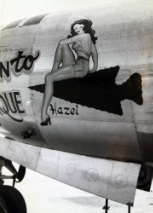 When World War II broke out, Mink served in the U. S. Navy 18th Construction Battalion (SeaBees)  from July 1942 to September 24, 1945. The 18th C.B. was attached to the second Marine Division in the south Pacific on Guadalcanal, Tarawa, Saipan, and Tinian. He was one of 180 men who won a Presidential Unit Citation for work on Tarawa.  During his deployment, he contracted malaria and had a mild heart attack, although the heart attack was not diagnosed as such until after his second heart attack in 1960. During the war, Mink operated a sign shop painting latrine signs, grave markers, souvenir flags, nose art, and illustrating his unit's yearbook with his characteristic cartoons. The sign over the shop in the photo below reads "Tinian Branch International Sign Service," 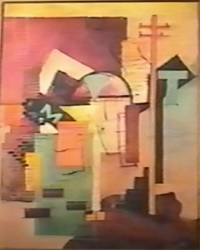 After the war, Mink bought a bungalo house at 192 Texas Avenue in Bryan.  The family moved there renting out the house on 30th Street.  To reconnect with his young daughter, Mink took up ceramics.  The hobby soon developed into a business.  Gary & Hazel had two more children, Jesse, born in 1948, and Liz, born in 1951. Jesse became the fourth generation Minkert sign painter and an artist in his own right. In 1952 the family returned to the 30th Street house and turned the bungalo on College Avenue into Mink Signs and Art Craft. The shop sold ceramic supplies, beads, decopage and various other craft supplies. College Avenue was a main thoroughfare from Bryan to College Station and Texas A&M and consequently was an excellent commercial location. While Gary painted signs and made ceramics, Hazel ran the shop. To attract business, Gary began a very successful line of
face mugs depicting "Ol' Sarge," an Aggie tradition.

In 1959, Mink expanded the sign shop and warehouse behind the craft shop. Not wanting to cut down a tree that was growing in the middle of the warehouse site, Mink built the warehouse around the tree leaving a hole in the roof for the tree to grow through. From this warehouse he painted moving vans, built Christmas floats, and designed department store window displays.  He also painted murals on location for the Prairie View A & M gym, Cattleman's Restaurant in Madisonville, and Guadaloupe Mexican Restaurant in Bryan.

In the late 1950s it became clear that Mink's health was failing. He had always wanted to study art seriously.  If he was ever going to do that, this was the time. He enrolled at Sam Houston State College (SHSC) in Huntsville, Texas driving the 50 miles each way daily for classes. While attending college, he took his family on weekend trips to Houston to visit galleries and the Museum of Fine Arts, Houston .  These trips would inspire him to open the first art gallery in Bryan in a corner of the shop. The gallery showed his own work as well as that of other local artists. SHSC allowed Mink to count his previous credits from 30 years before as well as his military service toward his degree. He graduated with a B.B.S. degree in Art in  August 1960. 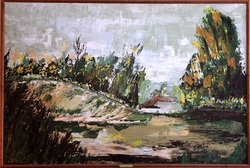 Just days later, during that especially hot summer, Mink had the heart attack he suspected would come. He retired at the age of 50 and turned the sign shop on Hutchins street into an art studio where he taught art. As his heart disease progressed, Mink was forced to give up teaching, giving him more time to paint. His old station wagon became a mobile studio carrying paints, brushes, rags, an easel, a stool and his lunch. Often he would pick up a painting partner and neighbor, Eda Kernodle, and spend the day in the field sketching and painting the east Texas landscape. In order to acquire supplies wholesale, he expanded the shop's inventory to include artist's supplies, added a frame shop, and renamed it Mink Art Supply. During these years, from 1960 to 1969 Mink was a unifying influence on the arts in Brazos County. He was a judge for juried shows sponsored by the Brazos Valley Art League and was a founding member of Stage Center, a local amateur theater group. He designed and built sets for many of the Center's early plays. 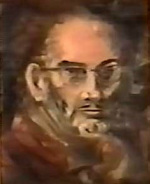 Mink died of a stroke after awakening in the middle of the night with chest pains on July 22, 1969 just two days after watching the first moon landing. His family sponsored an exhibit of his work collecting pieces from family, friends, and businesses around Texas.  The exhibit was held about a month after Mink died on September 2-6, 1969 in a store front building on Main Street in Bryan.